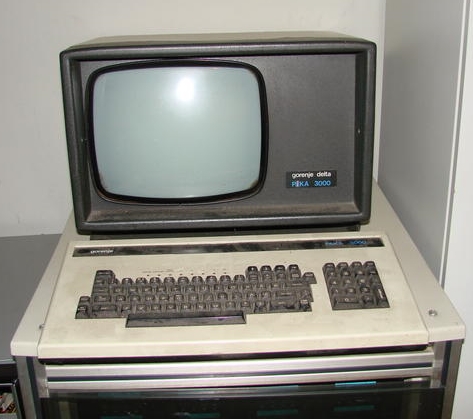 The Paka 3000 terminal was developed in 1985 by Gorenje and advertised by Iskra Delta. Among others, it was used by the Jesenice and Štore ironworks.

The terminal was made up of a power supply unit, a monitor, the KLT-T logic card, and linking/connecting? cards which connected the aforementioned components, as well as the keyboard, computer, and printer. The logic card ran on the Intel 8085 microprocessor. To display images, it used the AVDC (Advanced Video Display Controller) and CMAC (Color Monochrome Attribute Controller?) circuits developed by Signetics. The ability to save settings in the memory after it has been turned off, already seen in the Paka 2000 terminal, was retained. Paka 3000 used special logic and the connection enabled by the KLT-T card to enable the use of the light pen which was used to determine positions on the monitor. This is an ability also seen in some IBM-made terminals and industrial applications. The bidirectional 8-bit parallel interface allowed the graphical processor to be connected, which enabled a bunched character-graphical video output?

The terminal’s monitor settings and the modularity of its developed software made it easier for it to emulate other terminals. To develop the software, a monitor programme installed into the KLT-T was used. The monitor programme’s input-output unit was a connecting terminal, and at the same time the terminal of computers on which the original programmes were created. It was able to receive the code of a programme via the KLT-T connecting terminal and test it after it had been uploaded onto a special memory.

A more detailed description, equipped with diagrams and the terminal’s specifications, can be found in the first edition of the Informatica magazine from 1985, on pages 20–26.

Two other versions of the terminal, the 3090 and the 3100, exist, however, we could not acquire much information about them.